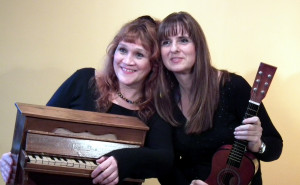 “Their loving song will take you down the narrow street of your childhood and bring back to you the smell of your old neighbourhood and the most beautiful stories of your homeland.

They are Selma and Selma. The sevdah duo Selma & Selma was created far away from Bosnia, in rainy Luxembourg,”  writes the journalist Almir Mehonić.

In 1992 refugees from our country started coming to Luxemburg. That was the time of intense socializing, sharing joys and sorrows and evening gatherings.

At one of such gatherings Selma and Selma met. They sat down at the piano, started singing, and made a friendship that has continued to this day.

Sharing great love for the Bosnian song and Gypsy music, they began singing sevdah in their own way. They have been singing together for almost 25 years now, giving something new to the Bosnian traditional music. It has been immortalised on their first album “Sevdah de Luxe…” in 2002.

In 2008 Selma Schauls released an album (her first as an author) on which Selma Ćimić played a very important role. Their cooperation through numerous concerts and various musical formations has continued to this day. It is this beautiful combination of voices that makes their work unique, which is especially noticeable on Selma’s latest album “Just B with Selma”.