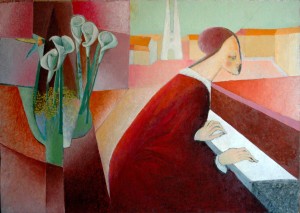 My third album is called “Just B with Selma”. It deals with B suites whose melodies haven’t left me alone for years. B like the Balkans or Bosnia, I could not tell exactly. I often heard them as dances, and I was even not sure about the name. These themes would emerge in the small hours by the piano. I had to shape them since they haunted me so persistently, not allowing me to do anything else. Unlike the first and the second album, this CD has no “language barriers or burdens”. The voices act as instruments (Selma Ćimić delighted me here again) and run through the whole project in a little unusual way. The texts in several songs are in a fictional language, since we didn’t want these melodies to be associated with any particular region. Irregular rhythms that prevail in the CD are just part of me. And my cultural heritage, I guess. The rhythm section, the double bass, the drums and the piano were recorded in Lisbon, where I found exactly what I wanted and imagined.

This time the range of musical colours has been changed. There are some instruments here which could not be heard on the previous CDs. Now, it is the strings that give a special touch to all the tunes. The oriental sounds are entrusted with the instrument called the oud, which, along with the clarinet, really embellishes a couple of songs. And, once again, Selma Čimić and Sergio Rodrigues are next to me. Selma, as my favorite singer, and Sergio, with his rich arrangements, jazz approach to the piano and the right feeling to recognize exactly what I want. And it seems to me that, under his baton, something was created that cannot be described as ­”déjà vu”.