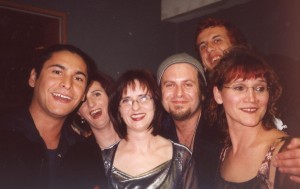 In the period from 1991 to 1995, the war devastated my country, and I remember those years as a time of fear, great sadness and nostalgia for me and all my friends from the former Yugoslavia. Our country literally fell apart. During that time I met my wonderful friend Selma Čimić, and many other nice people who came to Luxembourg as refugees. While the war was destroying our country, we were gathering together, mostly at my place, sharing our worries, talking and singing old, traditional Bosnian songs, so­ called sevdalinke. That was how my first album “Sevdah de Luxe…” (2002) was made, to immortalize these gatherings, and nostalgic moments in Luxembourg. Selma and I have been singing together for 23 years now, ever since we first met. We have interpreted sevdalinke in “Selma & Selma” way. These original songs have been enriched through collaboration with musicians from various countries, which gave them a special touch. I guess we wanted to connect the old and the new homeland: Bosnia and Herzegovina and Luxembourg.